VoIP stands for Voice over IP, which means telephone voice calls over the internet,  or over an IP network.....more>

Whether you have a successful Internet or phone session, may depend on how many other users have been sold the same package on the same network, and are contending for the bandwidth at the same time as you. The number of users subscribed to the same network is known as Contention Ratio. ...more>
Azimuth Elevation Calculator

Technically, all parabollic dish satellite terminals less than 3.8 m could be called Very Small Aperture Terminals, or VSATs, but the term VSAT generally refers to  transmit/receive (TX/RX) satellite terminals used for two way, data and voice traffic, like internet and telephone. A VSAT service is typically billed on a monthly contract, rather than by the minute, or by the megabyte like Inmarsat satcoms.

wsing, email and telephone, the most common system is the 1 meter, Ku-Band VSAT , combined with an iDirect modem, for which you pay a fixed price, billed by the month, for virtually unlimited usage.

Like DSL at home, the system is always on,  and the access is shared among several other vessels contending for the same bandwidth. If the overall bandwidth is sufficient, and the number of vessels (contention ratio) is kept reasonably low, this is the most cost effective way of providing full service internet access to vessels at sea.

Depending on your bandwidth requirements, the typical monthly costs run between $1000  to $4000 and up.
The system uses a 1 meter, stabilised, Ku-band antenna like the SeaTel 4006 or 4009, the Orbit 7103 or the KNS Z10 costing in the region of $50 000 to $60 000. The antennas weigh about 120-240Kg (250-500 lbs) and are housed in a radome of about 1.2m (50") diameter.
Satellite services are provided by companies like Stratos, Marlink, MTN, Caprock and a rapidly growing number of smaller companies and resellers. OmniAccess provides tailored VSAT services to some of the most elite super yachts.

Unlike global beam C-Band, Ku-Band provides regional coverage of certain areas, such as continental North America, Caribbean, South America, Europe and Mediterranean, select regions of Asia and the Pacific, and most recently, a Transatlantic beam covering the north Atlantic shipping routes. When a vessel moves from one region to another it will be necessary to change satellites, change satellite beams on the same satellite, or in some cases even change providers.

The high cost of the antenna equipment is driven by the tracking precision required to keep the antenna pointed at a tiny satellite 22,300 miles above the earth while the vessel rocks, rolls and turns in the ocean below, and the relatively small maritime VSAT market, with only about 5000 stabilised VSAT terminals, to share the costs of development and production of  this precision equipment.

With the cost to build, launch and operate a geostationary satellite over a lifespan of 10 years, at about $300 million one can understand the high, $2000-$4000, cost that the end users must pay for a small portion of the bandwidth.

Prices could range from something like $1500 per month for a 128/128 kbps circuit to $4700 per month or more for a 2048/256 kbps circuit.  If you are quoted prices much less than this, you can be assured that the operator is cutting costs somewhere,  probably by over-subscribing and reselling the same bandwidth to multiple users. Even though low priced, over-subscribed networks can sometimes meet one's needs quite adequately and cost effectively, one must remember that you get what you pay for.

A correctly proportioned satellite network with an appropriate number of contenders, should provide perfectly satisfactory internet access, unless one of the users is hogging all the bandwidth by continually downloading huge movie or music files. Some providers put bandwidth limits on each user to prevent this from happening.

Some providers will offer the option of a committed information rate (CIR) where they guarantee that your bandwidth will never drop below a certain (usually quite small 16-32kbps) level. This just means that your internet will not grind to a halt, but simply slow way down at times of heaviest contention. Often a certain CIR is included in your monthly cost, but increasing the CIR can be quite costly. If you need higher guaranteed bandwidth, you might be better off with a dedicated (uncontended) service if you can justify the cost.

While there is no fixed formula for calculating a satisfactory contention ratio, the best providers will monitor bandwidth usage, and adjust bandwidth accordingly to accomodate the needs of the subscribers. This is usually only possible with larger providers that have open ended bandwidth agreements with the satellite companies.

Ku-Band satellites operate in the 12-14 GHz band and provide spot beam, or regional coverage to certain areas on the earth. They require smaller, 1 meter, VSAT antennas and provide more economical coverage to vessels that operate in a particular region for some period of time. When the vessel relocates, it will need to change to a different satellite and a different satellite beam.

Only high traffic areas are covered with Ku-Band, with the first Transatlantic beam  becoming available in 2009.

Time Division Multiple Access (TDMA) is like timeshare in the sky except that you are not buying a week or two per year, but rather a few milliseconds every second. While you are downloading your Internet, or speaking on the phone, you don't even realise that there are several other users doing the same thing on the same satellite link. When there are fewer people using the link, there is more bandwidth available for you, and when there are more people, you will have a bit less.

Due to the extreme cost of building and launching a satellite, higher bandwidth links are very expensive. Dedicated Single Carrier Per Channel (SCPC) circuits are not only expensive, but are also very inefficient, due to the bursty nature with which we use them. There are gaps between files, gaps between bits and bytes, gaps between phone calls and even gaps between words on a phone call. The only way to make efficient use of a satellite circuit is to share the bandwidth and the cost among several users.

Whether you have a successful Internet or phone session, may depend on how many other users have been sold the same package on the same network, and are contending for the bandwidth at the same time as you. The number of users subscribed to the same network is known as Contention Ratio.

Sharing the network with other users in this way, of course drops your monthly costs tremendously, and if the contention ratio is reasonable, you will not even notice the difference. On the other hand, if a circuit has been oversold, the quality of your experience could be greatly reduced, especially if one or two users in the pool are using excessive bandwidth by downloading movies or huge files.

Advertised contention ratios range from as low as 1:5 to 1:8 to as high as 1:20 and beyond. This can be interpreted in different ways. When they state that the contention ratio is 1:10, this may not mean that only 10 vessels are assigned to this circuit. Since all users are not necessarily online at the same time, some satellite operators define this as no more that 10 persons online at the same time (on average). Diligent operators will monitor the traffic and make adjustment to ensure that this remains more or less true.

Under normal circumstances however, it is surprising how many users can successfully share the same bandwidth and all have a satisfactory experience.  Because of this, it is difficult to specify exactly what is an acceptable contention ratio. I know of a cruise ship in the old days that had 49 terminals on a 128/128 circuit. Granted, not all of these were in use at one time,and they would get some complaints from time to time, but many people got to send their emails and do their online business sucessfully.

Often when you discuss contention ratios with satellite providers, you can expect vague replies.

Some providers guarantee a minimum contention ratio, but the proof of the proverbial pudding is in the actual throughput that you experience, and the quality of your phone conversations over the link. The satellite provider can also guarantee a certain Committed Information Rate or CIR that your throughput should not drop below.

Buyer beware
Generally speaking, the cost of satellite bandwidth (in a particular band and area) is much the same to all providers, so if you get offered bandwidth at extremely low prices, they are obviously cutting corners somewhere, and you should expect a less than perfect service. On the other hand, for some users, the low priced networks prove quite adequate for their needs.

It is best to talk to others that have been using a particular service for some time, or better still, go onboard a friends boat and try it for yourself.

Comparing reflector sizes and areas to a 1 meter antenna 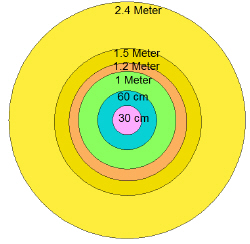 The area of the reflector dish is directly proportional to the receive and transmit gain. The area of the dish is calculated by the formula
π x R2
(or 3.142 x 1/2 Diameter squared) .

Doubling the size of the dish increases the area and the gain by four times.

This can make a huge difference to the amount of data that can be received or transmitted in a particular satellite footprint, and it will also determine how far out to the edge of the footprint one can travel.

In the case of VSAT your satellite provider will determine the size of dish required for a given area. On TV systems the size of the antenna determines how far you can travel to the edge of coverage, and how much rain fade you can withstand.

As a rule, it costs more to deliver the same VSAT services to a smaller dish, and less for a larger dish. If you have a VSAT antenna that is larger than normal, you may be eligible for a discount from your satellite provider.

The amount of interference that a VSAT will cause, depends on the spectral density of the transmitted signal when it reaches the satellite. Some networks are now employing new technologies that spread the signal out over several frequencies, thus reducing the spectral density at any given frequency and allowing the use of much smaller antennas in the range of 60cm(24") and 82cm(32") which are commonly called USATs. This extends the VSAT market to a much larger market of smaller vessels that could not support a 1m dish. The KVH V7 is an example of a USAT.

C-Band satellites operate in the 4-6GHz range and provide global beams that cover about 1/3 of the globe that is in sight of the satellite at a time. This requires larger, 2.4m-3.0m VSAT terminals and is usually employed by vessels that need seamless coverage as they move from region to region.